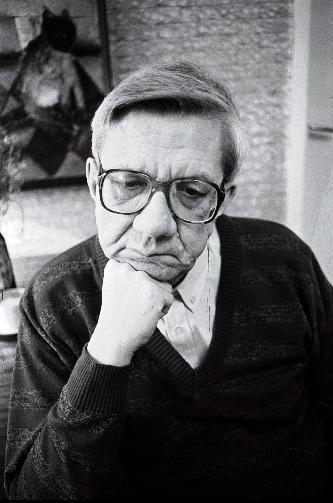 Eno Raud (1928–1996), one of the best-known and most beloved children’s writers in Estonia, was born in Tartu to the family of writer Mart Raud and teacher Lea Nurkse. He studied Estonian language and literature at the University of Tartu and worked as an editor at the Estonian State Publishing House until becoming a full-time writer. He was married to Aino Pervik, another children's writer: they had three children, all of whom are also writers.

Raud penned more than 50 books of stories and poems over his lifetime. His most popular works include the story of a rag doll named Raggie and a four-part story about three slightly eccentric fellows: Halfshoe, Mossbeard, and Muff (Three Jolly Fellows). The author's works are considered classics not only in Estonia, but also in the other former Soviet countries. His children’s books have been translated into more than 30 languages, and are rich with fantasy and humour.

Wikipedia
The works of Estonia’s most famed and translated children’s author, Eno Raud (1928–1996), are exceptionally rich and diverse. He has written poetry and prose for children of very different ages, has used different genres – from folk-humor prose through novels, and additionally has made popular folklore adaptations for children – thus familiarizing young readers with the hero of Estonia’s national epic Kalevipoeg (1961), Saaremaa’s Suur Tõll (1959), as well as Kaval-Ants ja Vanapagan (1959).

Although most of Eno Raud’s works were published during the Soviet period, he has managed to keep his writings free of politics. The events of Raud’s books often take place in a fantasy world, outside of a particular era. Yet even in his realistic books for children and youth, Raud was able to avoid leaning towards the "socialist realism" favored by communist ideology. Incidentally, the same quality is characteristic of several Estonian children’s writers that wrote at the same time as Raud – Jaan Rannap, Ellen Niit, Aino Pervik, Leelo Tungla, etc.

Raud’s most popular book is undoubtedly Sipsik (Raggie, 1962; followed by Anu ja Sipsik (Anu and Raggie), 1970). It is the heartfelt tale of five-year-old girl Anu, whose older brother Mart crafts for her a rag doll with striped pants for her birthday. Raggie indeed doesn’t come out looking especially pretty, but it has a soul – the boy stitched the doll together with such great love – and becomes Anu’s and Mart’s faithful playmate. The book is characterized by a beautiful balance between fantasy and reality – to a child reader, it seems that the doll truly is alive and its brother and sister do send it to appear on television or go to the Moon during their games. An adult reader grasps, however, that Raggie emerges thanks to the children’s lively imaginations. As of today, the Raggie stories have become a classic of Estonian children’s literature, with which many generations of readers have grown up. Naturally, Raggie’s popularity has also been helped along by artist Edgar Valter’s vivid drawing. Raggie has been translated into 12 languages.

Eno Raud’s second successful work is a series about three jolly fellows (Naksitrallid, Three Jolly Fellows 1-2, 1972 and 1975; Jälle need Naksitrallid, Three Jolly Fellows 3-4, 1979 and 1982). The books, amount to novels and are meant for readers aged 8+, tell of the friendship shared by three little men: Muff, Halfshoe, and Mossbeard. The men dream of journeying to the sea, which they indeed never reach. Instead, they end up having crazy and unbelievable adventures. However, although the works are fantasy novels, the attributes surrounding the three little men are quite present-day – so, for example, the trio roams around in a small red station wagon, which has modern cooking equipment: one especially cool device is a water-heating spiral that can vaporize an entire lake in just a few seconds! Raud has simultaneously been able to capture universal types of people within the three men – a romantic poet, a green hippie, and an adventurer with a quarrelsome temper (again illustrated by Edgar Valter). Nature preservation is a motif spanning the stories – the trio’s adventures are indeed very exciting, but it becomes clear to the reader that no matter how many modern-day comforts might surround us, we still depend upon nature. In addition, there must be a balance in nature, which one must not ruin. The first part of the "Jolly Fellows" series was included in the 1974 IBBY Honour List, and likewise received an annual Estonian award for children’s literature.

The main trend in Eno Raud’s works is his exceptional ability to speak to a reader about important things, while doing it in a way that a 5- to 6-year-old reader understands him. He is able of doing this via instructive children’s stories – in the way as he does in the collection Nii või naa (This Way or That, 1957) and Mõru kook (Bitter Cake, 1959); but he can also implement a fantasy world, where – similarly to Hans Christian Andersen’s works – items that originate from daily life start to act (Konn ja ekskavaator, The Frog and the Excavator, 1961).

Many of Raud’s storybooks for small children are written in a folk style close to parables, or even folk-humor. Yet even in these works, stepping up alongside the traditional animal heroes such as cats/mice/bears/rabbits/foxes are such more modern opposite pairs as a tractor and a horse, a cow and a milk truck, a helicopter and a windmill. With the help of these characters, the writer helps explain the rules and laws of the surrounding world to readers. In these stories, the writer is just and instructive: good triumphs and bad gets just what it is due.

Although Eno Raud wrote stories both for little boys (Väike autoraamat, Little Car Book, 1974) and for little girls (Triin ja päike, Triin and the Sun, 1971), his works are universal by their essence: children of various ages as well as their parents will find something that speaks to them in Raud’s books. In the Estonian context, it is important to add that Eno Raud was also a masterful children’s poetry writer, who gladdened readers with his plays on words and textual tricks.

With his realistic children’s stories, Raud appears before the reader as an author with a completely different signature. The dilogy Roostevaba mõõk (The Un-rusted Sword, 1957) and „Sõjakirves on välja kaevatud” (The Battle-Axe is Unearthed, 1959) has become a classic of Estonian boy’s stories that can be compared to Hungarian writer Ferenc Molnár’s book The Paul Street Boys. The book Märgutuled Padalaiul (Beacons on Padalaid Isle) is about a group of city children that end up on a lone island on their own and their efforts to get by, which are spiced up by some unusual events. In the three stories of the book Lugu lendavate taldrikutega (A Story with Flying Saucers, 1973), the children search for signs of an extraterrestrial civilization, telepathy, etc.; however, always end up (perhaps to some readers’ disappointment?) finding a solution that satisfies ordinary thought. One must admit that the adventure stories aimed primarily towards boys aged 10+, in which friendship, helping out one another, and getting by in a difficult situation hold an important place, are also enjoyable for girls of the same age.