The exhibition The Jewish Pirate, the Sacher Torte, and the Ethiopian Queen by the renowned Israeli illustrator Lena Revenko will be opened at the Estonian Children’s Literature Centre on Tuesday, August 2nd, 2022 at 5 pm. The artist will also give a lecture regarding the exhibition at the centre after the opening. The lecture will start at 6 pm and will be held in Russian

Lena Revenko was born in 1976 in Minsk, Belarus, and moved with her family to Israel in 1990. Currently she lives in Tel Aviv and works as an artist and a graphic designer. Estonian audiences have seen her work at the 2018 Tallinn Illustration Triennial Power of Pictures and the exhibition Hares, Foxes and Other Humans with her Israeli colleague Irena Aizen open in the Estonian Children’s Literature Centre in 2018.

Lena started to attend children’s art school at the age of six. By that time, her drawers were filled with drawings because as a child of divorced parents she spent a lot of time on her own. To avoid boredom she started to draw and accompanied by audio recordings of fairy tales. At eighteen, she started her compulsory military service where she spent two years as a graphic designer creating video games to encourage children to learn Arabic. After the military service, she studied at the Bezalel Academy in Jerusalem and graduated with a BA in visual communications and illustration. Her work has been exhibited in galleries in Tōkyō, Kyōto, Shanghai, Miami, Los Angeles and Israel.

The exhibition is open during the business hours of the centre until September 3rd, 2022.

Portrait of the pianist and composer Lalo Shifrin by Lena Revenko. 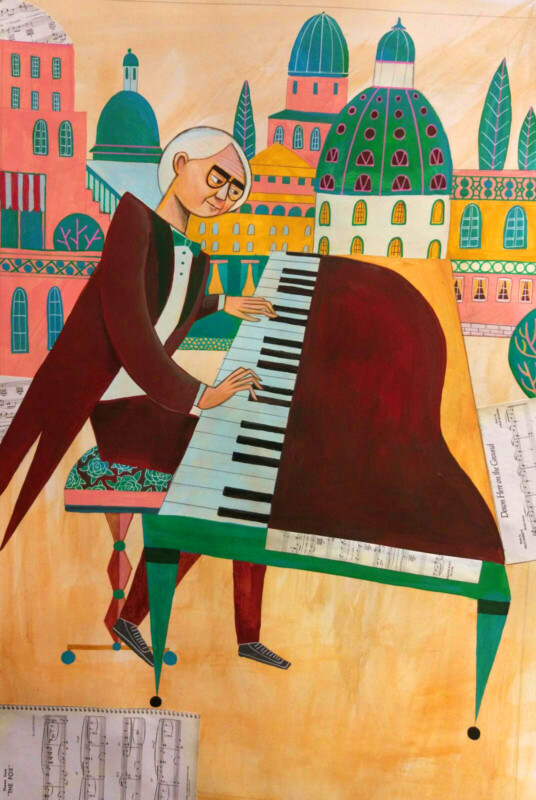