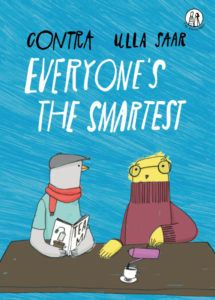 CLiPPA award-winning publisher The Emma Press is a publishing a collection of children’s poetry by Contra, an author dubbed ‘Estonia’s Michael Rosen.’

After the CLiPPA success of Kate Wakeling’s 2017 collection Moon Juice, the Birmingham indie has continued to expand its list of translated children’s books. Having explored school life in Latvia with Ieva Flamingo’s The Noisy Classroom (2017), now they are bringing popular Estonian poet Contra, whose playfully absurd, heavily-rhymed poems have made him a hit on Estonian television, at public events, and in schools, to English-speaking audiences for the first time.

A book of Contra’s poems about school, Everyone’s the Smartest, illustrated by Ulla Saar, is publishing on 28th September 2018. The publication received support from the Estonian Ministry of Culture.

The poems are accompanied throughout by Saar’s lively full-colour illustrations, which match the absurdity of the text line for line and stroke for stroke.

Emma Press director Emma Wright commented: ‘These quirky, fun poems, tell stories of playground and classroom life that will strike a chord with readers young and old – and will also teach them to look at school in a magical new way.’

Acquired in advance of the Baltic focus on the 2017 London Book Fair, Everyone’s the Smartest is a collection of children’s poetry suitable for reading to children aged 5+, and suitable for children aged 8+ to read on their own. The collection, like all Emma Press children’s titles, also comes with six pages of supplementary materials giving young readers prompts and tips to start writing their own poems.

But the publication was not without its challenges. Co-translator Richard O’Brien said: ‘There were times we thought: we’ll never be able to do this! The formal density of the poems meant it was like cracking an impossible code: every line rhymes, some of them twice, in the middle.’

Contra’s poems teem with tales of ice-skating, maths tests, and visiting aliens, and the translation team found some of them so inherently surreal it was hard to be sure they’d fully understood the text. As Charlotte Geater put it, ‘Before we could finish the draft, we had to make sure: is this poem really about a child skipping school to steal a snow-plough? Am I really reading an extended piece of Estonian wordplay about the class getting a visit from a famous zoo director?’

It was worth it, however, to introduce Contra to English readers. Born Margus Konnula in 1974, he is one of Estonia’s most prolific contemporary poets. Since his debut in 1995, he has published at least one poetry collection each year. He is a laureate of the Oskar Luts Prize for Humor and the Bernard Kangro Award for Literature; in 2015 he was awarded the Estonian Cultural Endowment’s Award for Children and Youth Literature. His popularity is such, according to Helena Koch from the Estonian Children’s Literature Centre, that ‘he has a profile here like Michael Rosen’s for English readers – children everywhere recognise him.’

Artist Ulla Saar has an equally impressive reputation. As well as illustrating Everyone’s the Smartest, she is a product designer, graphic artist, and interior designer. Her first illustrated book, Lift, was listed in the 2014 White Ravens catalogue by the International Youth Library. Since then, she has illustrated nearly 20 books, every one of which has gained international attention.

Everyone’s the Smartest was originally published in Estonian as Kõik on kõige targemad (2014). The Estonian edition won the 2014 Estonian Literature Annual Award for Children’s Literature.

It has been translated into English by Estonian poet and translator Kätlin Kaldmaa, along with Charlotte Geater and Richard O’Brien, who are poets and editors at The Emma Press. O’Brien has co-translated from Latvian previously, with titles including Juris Kronberg’s The Book of Clouds (The Emma Press, 2018) and Madara Gruntmane’s Narcoses (Parthian, 2018). 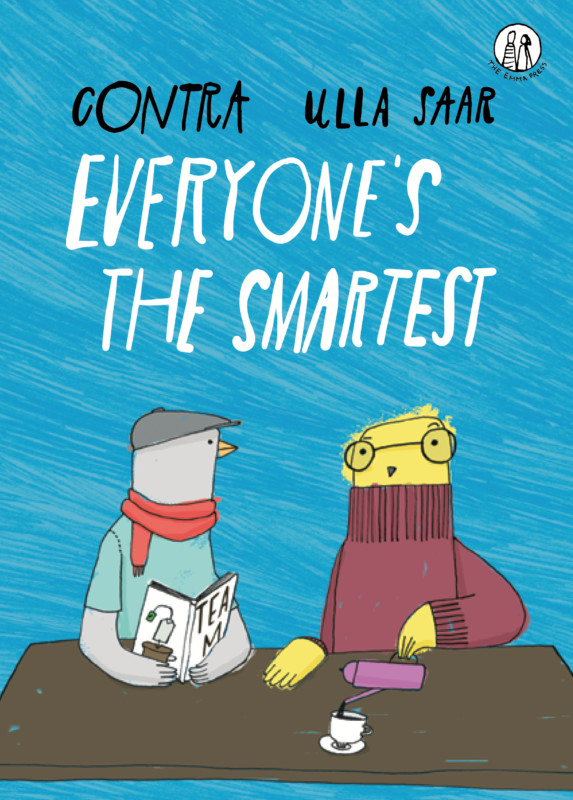